Can you stand it??!  T-minus 22 days til THE LAKE EFFECT release date!  (Which means only 22 more days of me acting like Crazy Eddy having a fire sale!!!!)

Here's a taste of what you'll get when you open your shiny plastic-wrapped TLE DVD box... 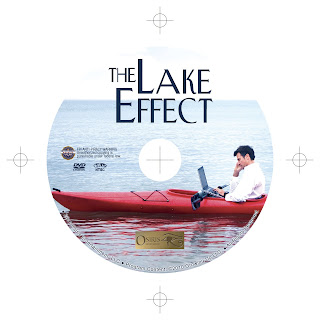 Ooh, Ahh... a little workaholic Ross Partridge from the original poster... I love that shot.
Last night, I did the final quality check of the dvd.  It's really great and I'm so so excited for everyone to see not just the movie but the Behind the Scenes Featurette and the Outtakes and to hear me and the ladies doing our silly yet informative Audio Commentary, where you'll hear all about how Ross scared me when he first showed up on set and how Kay had 3 am dance parties on the beach while the old people were sleeping.
Good stuff.
Now stop reading this blog and go buy another copy of The Lake Effect!
(*The "Y'all" is honor of my writing partner Cindy, who is kickin ass and taking names far away in the land of Texas until we sell a huge script and I drag her back to LA-LA land. Miss you Cindy!)
Posted by Tara Miele at 10:07 AM 1 comment:

On Sunday, I went to an amazing panel on Writer/Directors at the Writers Guild -- five inspirational hours of information on how to be a hyphenate creative career person in Hollywood from panelists Billy Ray (Shattered Glass) David S. Goyer (Batman Begins) Nancy Meyers (Something's Gotta Give).  After the panel, I was chatting with another female comedy writer in the parking lot and Nancy Meyers drove past us... She slowed, rolled down her window and called out, "Women directors?  Don't you give up!!!"

The woman wrote PRIVATE BENJAMIN, people.  FATHER OF THE BRIDE.   BABY BOOM.  And STILL it took her years on a (very) successful writing and producing career to get to directing her first film.   I've been in LA for 12 years.  Writing for 10.  Making THE LAKE EFFECT for 2 1/2.  Two and a half years!!!  That's how long it's taken us to make THE LAKE EFFECT and get it to you.    THANK YOU for your patience... thank you.  And thank you, Nancy, for those much needed words of encouragement.
I am excited to announce that the wait is OVER!!!!  Today is the day, Lake-lovers!  You can officially SAVE your hot little copy of THE LAKE EFFECT! 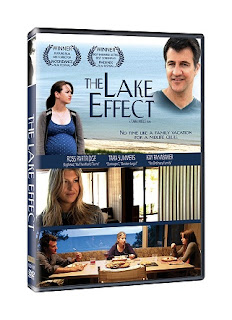 This SAVE is unlike the other save (the one I encouraged you to do on Netflix...)  This save means YOUR COPY of THE LAKE EFFECT will ship to you on OCTOBER 18th.  You can be the first of your friends on your block to own a copy!  Heck, feeling generous?  Buy copies for the whole block!

You can do it on AMAZON.

You can do it at CD UNIVERSE.
(And yes, you can still save it at Netflix but we're not sure when that Save will turn to ADD TO QUEUE... PS: If you haven't heard, Netflix will now be Qwikster, the DVD branch of Netflix...  Ah, how I love the in-between stages of media delivery/technology.  For all the sordid details about that story, look here.)

Now, this doesn't mean that the movie will never be in your Pay-Per-View list or On Demand or on cable... this is just the first wave of the release.

So - I am asking you today, if you have read this far,  please do THREE THINGS that will make a world of difference to us...
1) Buy the movie!
2) Write a glowing review on-line (Netlfix, Amazon, wherever!!)
3) Blog, tweet, facebook, digg, share, blast about the movie to your friends, family, and fans.  Only you can prevent DVD launch failures!!!!
Posted by Tara Miele at 8:43 AM No comments:

So much to talk about this week, let's break it down...

1. LUCKY MICHIGAN
I'm taking THE LAKE EFFECT back to Michigan!
THE LAKE EFFECT is playing in Bay City at the Hell's Half Mile Film Festival September 29th-October 2nd!   So, for all you Michiganders that missed it the first time around... come out and say hi!
Where is Bay City, you ask?  It's in that little armpit of your thumb.  Near Ann Arbor!    ***I stand corrected - Near Saginaw!! - thanks Laura!****


I'm very excited to go to this festival because a good friend of mine Shaun O'Banion will be there with his movie GIRLFRIEND which I've been dying to see and also I get to hang out with ROSS PARTRIDGE all weekend!  His movie THE OFF HOURS will be screening as well (which I also can't wait to see) It will be a Ross Partridge retrospective!


2. MARK YOUR CALENDERS!
Prepare to be harassed from now until Christmas (or Hanukah or Kwanzaa or Winter Solstice)! It's T-MINUS 8 Days until you can pre-order THE LAKE EFFECT on September 21st!   And T-MINUS a bunch more days until you can have it in your hot little hands on our street date -- October 18th!
Woot woot!!!!
Next week, I'll post links to all the sites where you can buy the movie...

3. DONE AND DONER.
I found some closure yesterday as Jennifer and I plopped down in front of the tele for a QC (quality check) of the DVD.   It was nice that the DVD came in this envelope from our distributor...


We loaded up the movie and enjoyed a couple of trailers and checked out the main menu and the Additional Features --  Behind the Scenes, Raindance Q n A, Audio Commentary, Deleted Scenes, Bloopers - this DVD is chock full of extras, people!  Save it!  Queue it!  Pre-order it!  Buy it!  Tell your friends! Thank you!

This is a re-post from Producer Ted Hope's blog HOPE FOR FILM.  My dear friend Lynette Howell, a ridiculously smart and hard-working indie producer, talks about the challenges facing indie film and about taking distribution into your own hands...

From Ted:
If you are a regular reader of this blog, or follower of mine on Twitter, I think you know that for me a Producer only deserves that credit when they truly commit to support the project from beginning to end.  You also probably know how challenging I find the calling of producing these days, when we are required to do more and more, and are rewarded, at least financially, less and less.