I'm a Bruins fan by default.  My husband went to USC and my daughter was born at the UCLA medical center.  Despite this loyalty, last night, Jennifer Westin and I headed to USC on behalf of one of our THE LAKE EFFECT interns, (the very talented, very smart, very lovely) Arielle Zakowski, to speak to her film fraternity.
It was a fun, casual event that preceded their monthly meeting and served two purposes:  to inform the undergrads about what it means to be an independent filmmaker and to remind us of how good and bad and crazy and silly this roller coaster journey is.
We answered questions about a wide range of stuff - everything from international distribution to YouTube to directing and micro budget filmmaking.
One of the most interesting moments came after a question about the path for a writer/director right out of school.  While we discussed the benefits of shooting a short film and developing a feature script, one student asked, “What did you see as the benefit of submitting your short to festivals versus just putting your short on youtube?”  I had to explain that when I shot my last short, we didn’t have YouTube!!!!  HA!
It's amazing and exciting how quickly things are transforming.  Thanks to the internets, these guys have access to truly independent distribution.  They don't need a festival to get 90,000 people to see their movie.  That's awesome.   Things like that will determine the future of our modes of entertainment and the students we spoke to last night will determine what film will transform into in the coming years.  (When I mentioned that I'd be begging them all for jobs in ten years, they laughed because it's true!)
The very last question of the night was:  If there is one thing that you’ve learned that you wish you knew when you started out, what would it be?
My answer was:  When an investor wants to give you a million dollars for your movie, take it – don’t haggle over a piddily script option price, just smile and nod and go get a job at Mc Donald’s if you have to support yourself during the two years you’ll be committing to making your first movie.
I believe Jennifer's answer was:
If you already know specifically what you want to do (i.e. write half hour sit coms) be ready to be hired by graduation day.  She encouraged students to spend this time getting their feature script or their reel or their TV spec scripts ready to go.
On our way to the car, though – we both thought of a truer answer to that question.
I wish we had imparted to the group that there will be so many times that you feel like you are on the verge of making it.  You set bars for yourself – “If I sell a screenplay, get an agent, make a movie… then I will have made it.”  So you do it -  you sell a screenplay, you get the agent, you make a movie… and then you need to sell that movie. You need to write and sell another screenplay, you need to manage your agent (or get a bigger one), you need to finance another movie, you need to sell that movie…  In other words, you have to KEEP making it.
Despite the stories we read about someone getting their big break – those big breaks happen after years of little breaks and lots of pushing.   This might sound daunting but the challenge is part of what all filmmakers love. It’s a marathon, not a sprint.  Luckily, we’re not a group that hunted down this career because it’s easy.
Thanks again to Arielle for having us out and to the great group of students who came to listen!  Hope it was as fun for you as it was for us.
For the benefit of the students, I’m re-posting my short SMACKERS, which is now on You Tube, here:
And here’s the trailer that Arielle cut for us for THE LAKE EFFECT:
Posted by Tara Miele at 9:37 AM 1 comment: 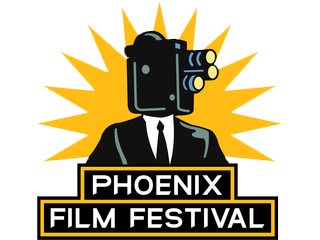 The Lake Effect is screening at The Phoenix International Film Festival!
I am really excited about this fest because: it’s is a great festival and it’s close to LA – so those Los Angelinos who are highly motivated could even DRIVE THERE!
There will be three screenings between 3/31 and 4/7 but we don’t have dates yet… you’ll know as soon as we do and then you can start planning your caravan road trip adventures!
For more information, check out the Phoenix Film Festival here! 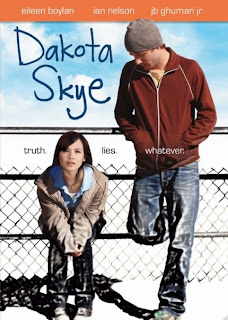 So, today, in honor of Phoenix and filmmakers from Arizona, I’m giving a shout out to my very talented filmmaker friend John Humber, who directed a wonderful film called DAKOTA SKYE that happened to premiere at the Phoenix Film Festival a couple of years ago.
John was such a fan of the festival, he told me that, "Out of all the festivals we took DAKOTA SKYE to, the Phoenix Film Festival was certainly the highlight.  The crowds, the staff and the fellow filmmakers combined to create an experience I'll never forget."
Just like The Lake Effect, Dakota Skye was shot on a low-budget with a minimal crew and (like the Lake Effect hopes to do) has garnered an incredible following and fan base.   And just like The Lake Effect, it was shot by my ridiculously talented husband Brett Juskalian.
So while you’re waiting for THE LAKE EFFECT to be released, you should check out DAKOTA SKYE!  It’s is available on-line  (See, it takes a while but these movies get out there eventually… The Lake Effect will be available some day, mark my words!)
Here’s the trailer…
To find out more (like where you can see this movie, check out their facebook page!)
Lastly, I’m not kidding about the caravan thing… we hope to see you in Phoenix!
Oh and one more thing - if you were following the blogs about my week assistant directing and posting the Pioneer/Pandora spot, Pioneer has officially launched the campaign.  It's hilarious - Check it out here!
Posted by Tara Miele at 7:43 AM No comments:

When a script is not quite there, we say, "We'll fix it in production."  And when a production goes awry, we say, "We'll fix it in post."  I'll never forget the day that I heard a producer look at a terrible cut and say, "We'll fix it in marketing."
One of my mentors, the late great Bruce Paltrow, once told me that control goes back and forth between the director and the network or studio on a show.  The Studio has control when you're working on the script, the director gets it back on set, and the studio gets it back in editorial... He actually told me that a smart director shoots a scene so that it can only be cut one way.  He was kind of awesome that way.
Luckily, I have never had to guard my footage or fight tooth and nail for an edit... I've always worked with collaborative producers who challenged decisions but never demanded final cut of a project.
This weekend, I had the pleasure of helping out my good buddy Zack Mathers while he was editing the Pioneer/Pandora commercial that I assistant directed last week.  ADing and helping with editing don't usually go hand in hand but that's besides the point.  Working on this edit, I was reminded of how much I LOVE editorial.

I have fond memories of sitting with The Lake Effect's devoted editor Steve Edwards, working to juxtapose reactions and insert shots to create something evocative or funny or surprising that was nothing just a moment before.  The editing room, for me, is often where I feel the most magic.  It may be because  writing is theoretical and directing so damn tangible... Editorial is like being able to see the forest through the trees.    I often find myself in the editing room singing, "Making lo-o-ove out of nothing at all!"   Who sings that, by the way?  Is that Meatloaf?  My Dad loves that guy...

Anyway, editorial is a magical place for a director... or at least it is for me.  It's the final stage of writing, a place where you figure out what you've got and somehow manage to create what you need... because despite Bruce's old school wisdom, there is never just one way to cut something.

Assistant Directing, the other white meat.

Okay, so today I am on a commercial shoot for a Pioneer Electronics/Pandora spot that my good friend, the uber talented Zack Mathers is directing/producing under his banner Frequent Flyer Productions.  Three twelve-hour days on set will be a nice break from baby care and writing.
I’ll be updating throughout the day, unless my blogging threatens to get me canned in which case I’ll be blogging at the end of the day after I’ve gotten call sheets out for tomorrow.
Quick note about Pioneer/Pandora: Pioneer apparently has developed a sick car stereo that plays Pandora anywhere and has a screen that you can manipulate the stations just like on your computer.    For a long detailed article on that, click HERE.


10:02 - got off a fast morning of running shots with our lead Amber - listening to Pandora on her Iphone... car dolly with steadicam op sitting in back.  beautiful light... 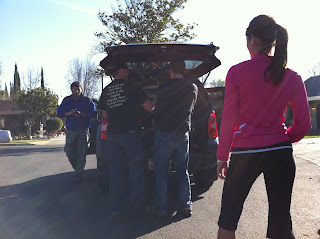 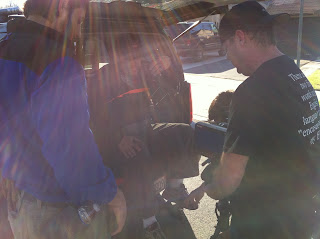 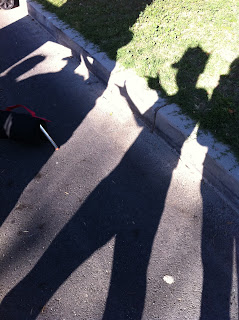 Off to shoot some interior car shots - functionality of the radio.


OKAY, lunch - made our morning.  And received a short bus that was delivered for tomorrow... 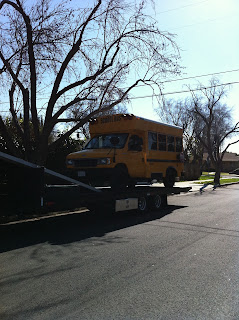 We're shooting this whole thing on the Canon 7 D with available lights and a few reflectors/bounce cards.  It's unbelievable how good it looks.  Granted, it helps to have a crew who knows how to use it and equipment that enhances it...
3:09 So now we're shooting all the interior car stuff - grabbing three different radios and all sorts of functionality - which is actually making me want one of these radios - you can do you tube, facebook, blue tooth, pandora.  I am a commercial for this commercial.
7:22 - wrapped a few hours ago - went great!  and I am wiped... we made it home just in time to read the little one her bedtime stories.  It was great working with my friend Zack - a director who knows what he wants/needs and doesn't over shoot out of fear!  And of course, it's always nice working with my husband - we haven't spent this much time together in too long.
Here's some screen grabs... 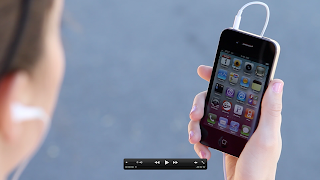 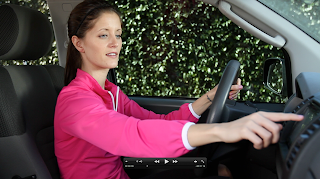 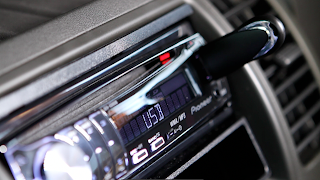 i'll post a link to the commercial when it's done!
Posted by Tara Miele at 7:00 AM No comments: