I'm on the east coast this week, visiting family and friends and (still) (sort of) working --

Today I took a conference call sitting in the car, in the driveway of my in-laws house.  It was my only guaranteed quiet spot!  It's a funny thing about this career - work and play overlap and intersect.  Every day, an interaction can lead to inspiration or lack of inspiration can lead to a day off... (maybe a forced day off without inspiration isn't really a day off after all...)

I actually get a lot of good work done sitting in the car.

Speaking of combining work and pleasure, I'm very much looking forward to doing some improv work on The Cynics with some NY actors while I'm out here... stay tuned for pics, video, and a summary of that wine-induced madness.
Anyway, that's all for this week!    Next week, if I'm allowed, I'll post the new cover art for The Lake Effect...
Posted by Tara Miele at 6:41 PM No comments:

Finding your way in to character... and back out again.

Once, when I was writing a particularly personal script, I found myself so wrapped up in the emotions of the characters and the drama of their lives that I would be completely wracked afterwards.  I would spend hours trying to shake off the mood, mostly by eating large quantities of chocolate.

I finally asked an actor friend of mine for some advice: How do you shake off the mood of a character after a rehearsal or performance?

His answer was simple, "I change my shoes."

It's a trick of theater that we writers don't often think of - but as an actor - getting into character is a process, aided and abetted by the time in front of the make-up mirror, getting into costume, literally strapping on character shoes (dance heels) or boots or whatever...  It makes sense that the process of getting out of character should be the reverse, that an actor could become themselves again by stripping off their costume and their make-up and changing back into their street shoes.

As a writer, we don't get that aid - we are expected not only to imagine the world, but the shoes, the face, the mind, and the words of these people.  It is no wonder then, that writers are nuts.

The shoe trick, worked, by the way.  But I still constantly find myself identifying too closely with my characters.  Right now, I am working on a movie about woman who, despite a good career, a good husband, and a good life, feels like she has lost her way.  Like she would like to throw the baby out with the bath water (not Baby Luna, just a proverbial baby) quit her job, pack up her house, ditch the city, and move to the country and live off the land.

Now, for the sake of this character and for my own curiosity (which really is the same thing), a show of hands - how many of you (my three readers) constantly question your life or your career path or the city you live in or the life you've chosen (or had chosen for you).  Is this American or generational?  Is this discontent a privilege of having choices?  Is this just something that artists do or is it something that only people in a sinking film industry do?

This inquiring mind wants to know...  Because I'm starting a commune in the country and I'm wondering who's with me! 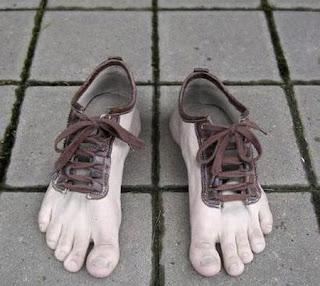 Posted by Tara Miele at 7:00 AM No comments:

Woman on the Verge...

Sorry (again again again) for the delayed post!
Here are some three digestible highlights of my life as a mommy/writer/director/woman on the verge of a nervous breakdown... (homework for the week:  See Pedro Almodovar's movie Woman on the Verge of a Nervous Breakdown.)
1.  I am writing a lot.  When I'm not writing, I feel like I have a hangover, which I have wittily named, "my writing hangover."  During these hangovers, I lose keys, checks, and time.
2.  So I feel like every week, I announce, "We finished the movie!"   We have finished the movie 145 times.  No, not that many - but there are so many steps to finishing!  Locking picture, locking sound, marrying the two, mixing the two, re-doing the whole damn thing at broadcast quality...  Anyway, I swear this time, it's true!  As proof, I present to you, the movie on tape, in all it's old-fashioned glory.  Something about tape makes me feel good.  Not as good as film, but better than a hard drive.  That probably tells you exactly how old I am.
3 - Had a GREAT meeting at Disney today with two very smart execs and Cindy and I are starting our second draft of Unplugged.  Tell your friends (if your friends are tweens who watch the Disney Channel...) this is going to be a good one.  Especially if Disney Channel lets me direct it!
3B - Our awesome TLE composer Paul Larson is writing a demo for the DC movie, channeling his inner teenage girl - LOL.  (Teenage girls say "LOL," right?)
4 - I spent an hour in the USPS in Burbank after my DC meeting, in an effort to deliver our film to our International Sales Agent in the UK.  As soon as I put the box on the counter, the lady behind the desk groaned.  Then I showed her my shipping slip with the UK address and she groaned again.  Then she couldn't figure out what "state"  London was in.  It took me a second to get my head around the problem and assured her that England didn't have states.  After that, the postal code NW5 1LB wasn't working on the USPS computer...  NW4 and NW6 sure... but not NW5 1 LB.  Not sure what is more frustrating - weird British postal codes or the inability of the USPS to figure them the eff out!   (PS: And hahahah - just finding some irony in the fact that I'm excited about Jimmy from the Postal Service and also loathing the actual postal service).
5 - Headed off to record a podcast for a filmmaker friend of mine, Travis Betz.  Travis and I met at the Phoenix Film Festival, where Travis' amazing zombie musical THE DEAD INSIDE was playing.  The movie ruled - it had the lovely, dark, bittersweet comedic tone and was visually stunning - it reminded me of one of my favorite musicals, Sweeney Todd (the original musical, not the movie).  Anyway, here's the link to the podcast -- Not sure when it will be up!
6 - Lastly, if you're not on my personal facbook page, then you missed Luna's quote of the week.  She was sitting in her kiddie pool in the afternoon and I was talking to Brett about The Cynics and Luna grabs me and says sweetly, "No Mommy no want to make a movie right now!"  I told her, "Fair enough." and managed not to do any more work until bedtime.   Despite Luna's perpetual cuteness, we are using some tough love and weaning Luna from her binkies.  She has mailed the disgusting little things (seriously, they're gross) off to two babies in need and in exchange got this "sleep monkey" to take the edge off.
Needless to say, there has not been much sleep since, I am the worst mother ever, and child services should probably intervene.
FADE OUT.
Posted by Tara Miele at 9:04 PM 2 comments:

First of all, happy belated birthday, America!   I hope if you're sitting at your desk reading this right now, it's with sunburned shoulders and a mild hangover from a weekend of too much fun.   I know I am.   I took a much needed long weekend to celebrate our final delivery of The Lake Effect.  Getting the deliverables together was CRAAAAZY.
For example, last week, I was very busy finishing up something called THE DIALOGUE SPOTTING AND CONTINUITY LIST.  It's a document which breaks down the entire movie per shot (all 1,309 of them, to be exact) in a table of images and audio/dialogue, timecode and duration.  It looks something like this:

...and is a time consuming, nightmare of tedium.   This document is the reason why I didn't get the blog up last week.

Also, last week, we had checked off of the more fun tasks of film delivery on our long list.  Recording Audio commentary.  Here's a shot of the ladies of the lake doing the dirty work:

(Sorry - blogger is not accepting pics right now! but just imagine, me - looking writerly (read: frumpy) sitting next to two beautiful actresses and Jennifer, with her eyes closed).  Pretty sweet.

Mr. Ross Partridge was much missed but the estrogen party was awesome.  It was the first time I got to watch the movie with Tara S. and Kay.  Highlights included Kay sharing stories of her sunrise dance parties on the beach after wrap and Tara S. remembering her agent explaining to her that she'd be sharing one bathroom with the entire cast and crew...   (which wasn't exactly true - props to T for still coming to do our little movie thinking that was the case, though!)

After all that, the movie was officially DELIVERED.    WOOOOO HOOOOOO!!!!!  That same day, we heard from Disney that everyone is very excited about our script UNPLUGGED and we'll be doing a second draft of that as soon as we get notes.   I am suddenly noticing Disney Channel Movies everywhere and this week, Luna said she, "Wants to go to Mickey's house to celebrate happy birthday."

A total non-sequiter -- Luna's best sentence ever said at a Koi pond this weekend:  "Bye-bye fishies!  See you in my taco!"
That girl funny.


A warning: Now that The Lake Effect is delivered, this blog is officially going to be much more about writing -- and nonsense.  Prepare yourself.
Posted by Tara Miele at 11:41 AM No comments: