This weekend, Graham Taylor, the Global Head of WME, (also a brilliant, hilarious guy and a dear friend) gave the rockin' keynote speech at LAFF.  He addressed the swift changes befalling the film industry and independent film, specifically, and called for the audience (and the industry) to rally.  I've shared the link to his speech here - but in case you don't get that far, I thought I would share this quote:

"Apathy and Cynicism are not the parents of great art, great movies or great entrepreneurs. The day our passion and enthusiasm subsides will be the day of our undoing."
His speech resonated with me profoundly.  In this business, naysayers abound.  Before I ever sold my first pitch, I was told, "Pitches are really hard to sell."  I hedged my bets. I had good producers and a star attached and I worked my butt off to make it perfect.  One month later, I sold it.  The same thing happened before I sold my second pitch and my first script.
Full disclosure: somewhere in there, I did get apathetic.  And cynical.  SOOOO cynical.  Anyone who's heard the story of how THE LAKE EFFECT came to be knows that somewhere in the fourth month of my pregnancy, I lost it.  I quit writing, I quit the industry.  I felt too powerless -- I couldn't imagine breaking another story, creating another character that would never see the light of the projector.  And then I got an email from Jennifer... who was taking back control.  We green-lit ourselves.
Jennifer Westin and I are now coming to a significant close on our journey with The Lake Effect.  It is hard work toward the end and last week, we once again found ourselves in a post facility at 1 in the morning at the end of a 15 hour day, when I began fading.   The next morning, Jennifer called to check in/apologize for the crazy late night (understanding that my child wakes at 6 AM no matter what time I roll in).   And I told her that on any other night, I could be home with nothing going on, jealous that somewhere out there, some filmmaker was burning the midnight oil.  Instead, all our hard work has culminated -- made us lucky enough to be facing the good nightmare of delivering our movie to a distributor.  (PS: Thanks to that late night, we'll have deleted scenes and outtakes on the DVD.  Weeee!!)
Again, I quote the great Graham Taylor,  "What's not boring is making shit happen."
Toolkit | Graham Taylor Keynote at LAFF: 'What’s not boring is making shit happen.' - indieWIRE
Posted by Tara Miele at 8:26 AM No comments:

WE SOLD THE LAKE EFFECT!!!
(Cue sound effects: cheers, applause, sighs of, "Oh thank God").  A wonderful small company called Osiris Entertainment now officially owns the North American rights for the film... We couldn't be happier.  It's like our little baby is all grown up, off to college to drink itself silly...
I lost the metaphor in there somewhere.  Really, we're thrilled that our little movie has found a home and will be available to anyone who wants to see it!

Okay. So we sold it; what does that mean, you ask?

1) We have a street date.  My movie's "droppin'" this October.  So you will be able to purchase a DVD on line.

2) We should also be available shortly thereafter for rent/digital download from the usual suspect internet sites... Netflix, etc.

3) In my dream world, we'll have a cable premiere.

4) If you live outside North America, you're gonna have to wait a little while longer. We won't have news on when until our international sales agent takes us to the big TV market in fall called MIPCOM.   But we have high hopes!

5) Amazingly, selling the  film doesn't mean the work is over.  It means a new round of work has begun for Jenn and me... and especially Jenn.  The deliverables list is long and involved and I have to hand it to my amazing producer for keeping it all straight and humoring me when I whine about it.   When you close a sale, you agree to give the distributor a list of "deliverables."  It's an extensive list of pieces of your film that will help make up the DVD - including outtakes, separate tracks of sound, audio commentary, every contract imaginable, and insurance that covers you and the distributor in case Sally Q. Suer decides that your movie is all about her life and hires Larry H Parker to sue you for half a million dollars.  (PS:  haha!  like I have a million dollars, do you know how little we made this movie for? PPS: I actually got sued by Mr Parker once, long story.  I got out of it).

We're also working on some of our international deliverables - which include a beefed up foley/effects track so that when they pull the production sound/dialogue to dub the movie in Italian, there will still be footsteps and door closing sounds for the Italians to enjoy.

By the way, I cannot WAIT to see the movie dubbed. When I sold my first movie, COUGARS, Sharon Stone was attached so we got a lot of press.  Seeing my name in an article written in Italian was so so cool... And that was just print - to hear my film translated will be awesome - even though as a film student I was taught that subtitles are always superior to dubs... This weekend, during my sound session at Media City Sound (my favorite sound house)  our sound god Jon Schell was telling me about a French dubbed copy of Star Wars that he has.  He remarked that of course James Earl Jones was amazing as Darth Vader but apparently the French guy is like 98% as good: "Luke, Je suis ton pere!"

PS:  Check out this great review that we got on our Michigan tour:

"The Lake Effect is a beautifully-shot, lovingly-constructed, heartfelt, little motion picture. It oozes warmth, charm, wit, and humor, and keeps us engaged for the full 90 minutes.... This is a movie that deserves some attention."

So there is some big TLE news on the horizon but knowing my wisely tight-lipped producer, Jennifer Westin, I'm not allowed to officially announce the announcement until the announcement is official.
So... no news for you!  YET.  But oh my goodness, I promise as soon as I can open my big mouth about it, I will.

In the meantime, a quick recap of my Michigan experience:

1) It was truly wonderful to finally share the movie with all the people who came together to make the film possible.  Thank you again to all the kind, talented, and generous Michiganders that made The Lake Effect possible and who turned out in droves in the rain to watch the finished product!

2) It was fun being interviewed on TV and radio but I loved Q n A's most of all - getting to talk to an audience after they've connected with the movie is really cool.

3) I was bummed to be at the lake house with crummy weather but it made working non-stop a little easier...

4) Watching an audience of strangers show up to a movie because "it sounded interesting..." and then watching them laugh and cry... was kind of amazing.

5) The whole time I was in Michigan I kept thinking: I'm ready to direct again.   I gotta get moving on The Cynics!  Damn damn!

Ok, so on that note (and to justify why The Cynics is being ignored)  an update on what I'm working on this week:

1) We have to do some sound work on TLE.  I know, you're thinking, "But I've seen the movie, it's finished!"  Not exactky.  For international sales, our sound specs have to be different - we need to build more foley so that when the dialogue drops out, we still hear footsteps, etc.  It's a good problem to have.  I want people in Germany to hear full sound when we sell them this movie!

2) Finished a first dirty pass of the Disney Channel movie Unplugged - I love that script already.  I had a blast watching every disaster movie I could get my hands on for inspiration. If you haven't watched Independence Day lately, I highly recommend you DO IT this fourth of July!

2) Still working on SHORT BUS, about the couple coming to terms with their daughter's autism... The script has finally found it's stride but it's harder writing that one - heavier lifting... I did some scenes while on the plane to and from Michigan for our screenings (btw, also watched the Justin Beiber doc on the plane - highly entertaining...)

3) Meeting with Kay P about some stuff... can't say what yet but I can't not work with her on something soon.

4) A producer on an old project rang me up and said there is the possibility that they may want to take the script out of turn around (which is when the option to make the movie has expired - reverting the rights to me), which is exciting.  It's a project I really love - so we'll see what happens there...

5) I have three TV pilots that are treated and need to be written.   So much to write, so little time...

And so much news to share that I'm bursting!  Hopefully, by next week, I'll be able to tell... 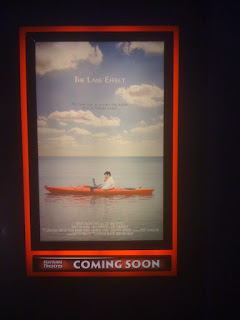 Posted by Tara Miele at 9:33 AM No comments: